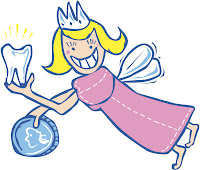 I think I might be the worst tooth fairy ever! This task was added to my “mom” job description about 6 years ago, and I have to say, I have had a hard time implementing those duties into my daily activities since that time. My oldest has “lost” all but two of his teeth after they fell out. The first one he swallowed, the next few fell out at school and even though he was sent home with something his teacher adorably named “the tooth taxi,” the taxi never actually arrived. By the time he actually had one to stick under his pillow, he didn’t even believe in the tooth fairy anymore. Each time he lost a tooth and then “lost” the tooth, he panicked that the tooth fairy would not come. Each time I helped him craft a letter to the tooth fair explaining what had happened, tucked him in to bed assuring him she would indeed still come, and then with the best of intentions I gathered 8 shiny quarters and waited for him to fall asleep. The first time, he would not fall asleep. I swear I was sitting on the couch considering using toothpicks in my eyes to keep them open so the tooth fairy could come and the morning would be happy and exciting. When he finally fell asleep, I was exhausted, but still awake, and managed to shove his quarters under his pillow. I completely forgot to take his note. In the morning, because he is a very bright child, he questioned the fact that there was money under his pillow, but the note he left was still there. I suggested to him that the tooth fairy new I liked to scrap-book so maybe she left the note for me. That worked. Once.

The next several times he lost a tooth, I again helped him craft his note. However, that boy does not fall asleep easily. I, on the other hand, fall asleep as soon as I sit down to watch something. In the morning, the boy would come in and wake me up (at least an hour before anyone in the house needed to be up) and insist that the tooth fairy had not come. In a panic, because I knew he was right and I was cheating him of part of the magic of childhood, I would fly out of bed and tell him he must not have looked hard enough. I would tell him to wait in my room while I made a quick excuse to keep him there for 45 seconds so I could run down to the laundry room, grab 8 shiny quarters and make sure they were well hidden in my hand. Then I would come back and get him and tell him we would go look together. We would go into his room and I would slide my fist filled with quarters under his pillow and explain to him that I was feeling around for whatever the tooth fairy might have left him. I would then drop the quarters and lift up his pillow and make the poor child believe he had just not noticed that the tooth fairy had indeed paid him a visit. Of course, because he never actually had a tooth to leave under the pillow his note would still be there and I would again explain, very excitedly, that the tooth fairy wanted me to scrap book his note. Seriously, how terrible am I at this job that in order to keep him “believing” I had to convince him he just didn’t look hard enough.

Yesterday, my daughter lost her first tooth. She didn’t swallow it, but it fell out in the car and I was sure we weren’t going to find it, so again I would be helping one of my children write a letter explaining how they misplaced their lost tooth. Luckily, we found it and when we got home we put it in a plastic bag for safe keeping. She carried it around all day and showed it to everyone we encountered, but it was still safe and made it under her pillow at bed time. In the meantime, my son also lost a tooth. His second one of the week as a matter of fact, and he pointed out to all of us as my daughter was explaining her hopes and dreams of a tooth fairy visit, that the tooth fairy had not shown up for him just three days earlier. Again, I point out that I AM THE WORST TOOTH FAIRY EVER!!!! Of course, it had been a LONG day (and a late night the night before) so it took everything I had to stay awake after I tucked both of them in so they would not be disappointed. Thankfully, it was a Saturday night, so I had three other adults to help keep me awake long enough for the tooth fairy to do her frakking job!

After I tucked the little people in, I went to my laundry jar and thanked Kidder Kaper (in my mind) for leaving quarters in his pockets when he takes off his pants. I gathered 16 shiny quarters and waited for them to fall asleep. I got my last bit of proof at how crappy I am at this part of my job when my daughter sat up after I shoved her quarters under her pillow. I quickly ducked down next to her bed and waited for her to lay back down. Ten minutes later, I was able to crawl out of her room, and feel like a perfectly adequate parent, that I had not yet ruined the magic of childhood for one of my children. Yet I cannot help but feel that she has several teeth left to lose, so I have plenty of time to fail miserably.